- Free Shipping Uk, Europe, USA and Canada on wallpaper by the roll -

Luxury wallpapers designed by me and shipped directly from my London workshop next day. Free, fast shipping for UK, US and Canada.

Wallpaper BY THE METRE

Zoe Pocock began her wallpaper design journey as a lover and user of wallpaper. Using it for both her interiors and her up-cycling/luxecycling projects, which became the initial signature style that launched Muck N Brass. She has always hung her own wallpaper, so quality and hang-ability are hugely important to her. This means every paper in the Muck N Brass range has actually been hung on a wall by Zoe herself. She progressed from using what was available to realising what was in her imagination. Designing initially for her own projects she eventually found manufacturers who could make luxury wallpaper that would be a pleasure to hang as well as a joy as live with.
Zoe's first ever wallpaper design for Muck N Brass, the ChiMiracle range, pronounced Ki - (as in kite) - Miracle has gained a cult following over just a few years and has expanded to 4 colour ways, Grey, Dark Blue, Emerald Green and Mustard. ChiMiracle and later designs like Furtiva lagrima and Pompous pampas are Zoe's modern spin on the British maximalist tradition. While Easy tiger, Lazy leopard and Glamour puss show her deep love of the luxury of animal print. Each expressed with her own quirky twists.
Animals, real and mythological were a feature going back to the precursor of wallpaper, medieval tapestries. These heavy and intricately detailed fabrics were highly labour intensive to produce and only available to super-rich, aristocratic households. Later, during the Renaissance with tapestries still incredibly expensive, decorated papers, sometimes loosely hung from walls and sometimes adhered to them became popular as a less expensive and slightly more accessible (but still only for the rich) stand-in for those tapestries. Tapestries had never been produced in England and had always been imported from France. When cross channel trade was interrupted by Henry VIII’s split with the Catholic Church both the rich and the super-rich were forced to adopt English made wallpapers.
All the Muck N Brass Luxury wallpapers are non-woven paste the wall papers. This leaves the comedic possibilities of a wobbly papering table, a step ladder and a few feet of soggy, sticky, stretchy and tearing paper in the past where it belongs. Based in the north of England, the historical home of British wallpaper manufacturing, our partner factories use the latest technology, to the highest eco standards. Creating high end wallpapers with supreme ease of hanging, durability and clarity.

Let customers speak for us

Quality of print is amazing and the quality of the fabric really couldn't be better. I wanted a luxury feel and I got it! Loved it so much used it to cover lamp shade, the front of one cushion, the piping on the other and re-upholstered a stool 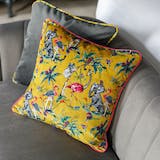 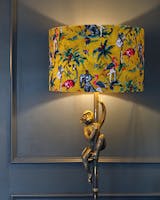 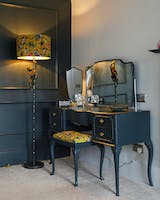 Really easy to work with and put on the wall. It looks absolutely fantastic and is great talking point... in a very good way. Couldn't be happier 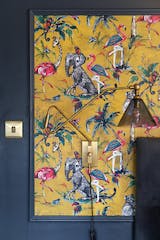 The design is fantastic and exactly what we were looking for. The paper is so forgiving and that made it really easy to fit and work with. We complimented it with Skimming Stone and Railings from Farrow and Ball and they look so good together.

It looks even better in person. We are using two different wallpapers in our remodel and are thrilled at these to be a part of it.